The store will not work correctly in the case when cookies are disabled.

Bogong Equipment has a new recommended climbing shoe resoler. Sticky Rubber Resoles is comprised of a duo – Gery and Natalie – who work out of their workshop in Wollongong. The thing that sets these guys apart is their dedication to returning climbing shoes to their original performance level. They have learned how to do this through techniques learned during months-long apprenticeships that they undertook with some of the best climbing shoe resolers in the world. One of these is an official La Sportiva resoler.

When Sticky Rubber Resoles approached us, we sent some staff shoes to them to inspect their work. We were pleased to note that their work is to a very high level indeed.

We spoke to Gery and Natalie to get some insights into their craft and their process. We found it pretty interesting, so we’ve decided to share it with you: 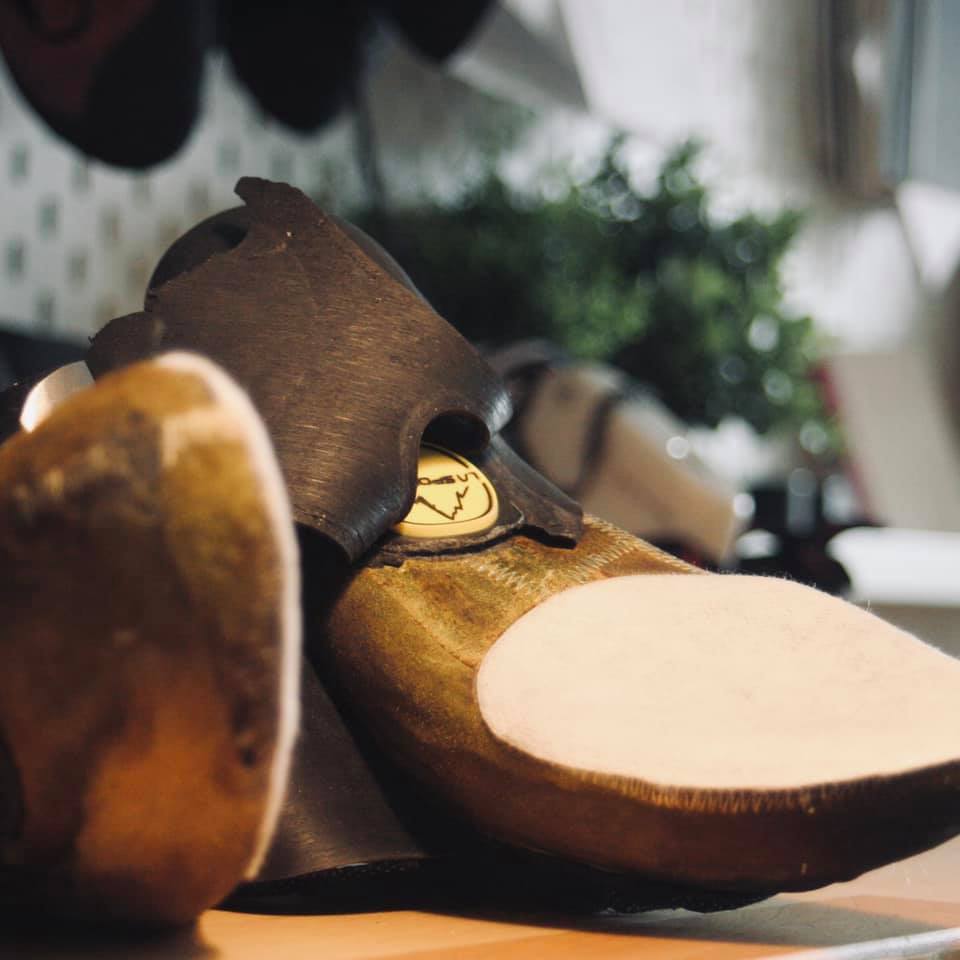 Bogong: What are your names and where are you from?

Gery: We're both from Sydney. I've been climbing for around 27 years. I started here in Australia, then climbed in Japan for three years, then climbed and lived in Canada for 10 years.

Natalie: I’ve been involved in climbing for three or four years. When I was 18 I started my own business in Sydney, working as a diamond setter for wholesale jewellers. Both of us gave up our jobs to live abroad and travel.


And during your travels you did a resoling apprenticeship with some sort of Yoda-esque shoe resoler?

N: Over six months we had three mentors. Some of the best rockclimbing shoe resolers from Europe and the United States.

G: Every second day we were on holiday, we would be in the workshop for four to six hours. That was one cobbler that we learnt from. Another was a La Sportiva official resoler. He's the one who really upped the game for us.


What were some of the things that you noticed he did differently?

N: The techniques. It was an insight into things that appear to be done a certain way.

G: I really noticed the machinery was very different from the standard. And the way of dissecting each pair of climbing shoes – that seemed to be very different.

For instance, there's what you could call a 'grinding' approach – we did learn this, but we quickly dismissed it as an unhealthy and wasteful practice. Because grinding away a shoe and then putting rubber back on it…

N: It's the best way to learn. 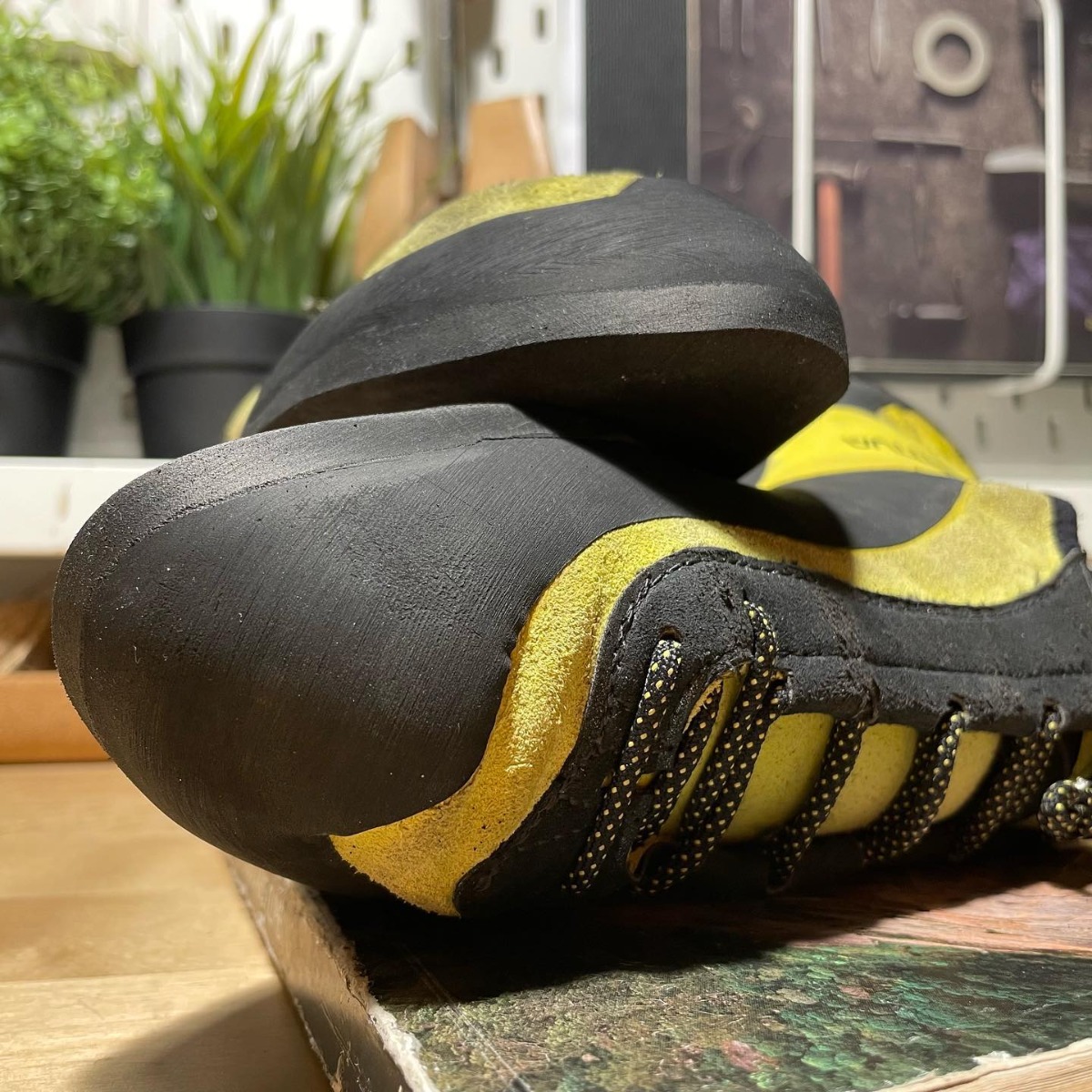 What skills do you need to be good at a craft like this?

N: Attention to detail. Being good with your hands. I was a diamond setter, and you'd be surprised how similar the methods are, whether you're working in gold or rubber. How certain compounds will react with other compounds; and the tools are quite similar.

G: One thing we kind of pride ourselves over is what we call the 'glue line'. It's the line each sole is placed on, and you can see it if you look carefully at the shoe. I remember while we were in our practice phase, back, you know, after six or seven months abroad and we were practising with our friends' shoes. One of our friends is a physicist and he comes back like, why is this line a little crooked?

N: [Laughs] We thought it was the most straight line ever... that taught us attention to detail.

G: Exactly, and it comes from not just finishing the shoes – like, at the very end process – but it comes from the beginning of the process.

N: And every step in-between.

G: I started slowing down and not rushing as much.

N: It does force you to slow down, doesn't it? Actually, the skill you need is accuracy. Cutting the sole to the correct shape, getting the glue line straight... if you lose one bit of concentration, a millimetre in or out, there is a knock on effect. You can be at the finishing stage, and it's not going right. And you realise something was out three millimetres several steps prior.


When you're doing a resole, what is the most important thing you want to get right?

G: The kind of things we look at are, replacing a midsole that might be warped. Turning something that’s misshapen and bulging like a clown shoe back into a downturned shoe. We compare the shoe to what it should look like when it’s new: looking at the original shape, technical specifications and performance characteristics it should have. We try to return it to what it should be. 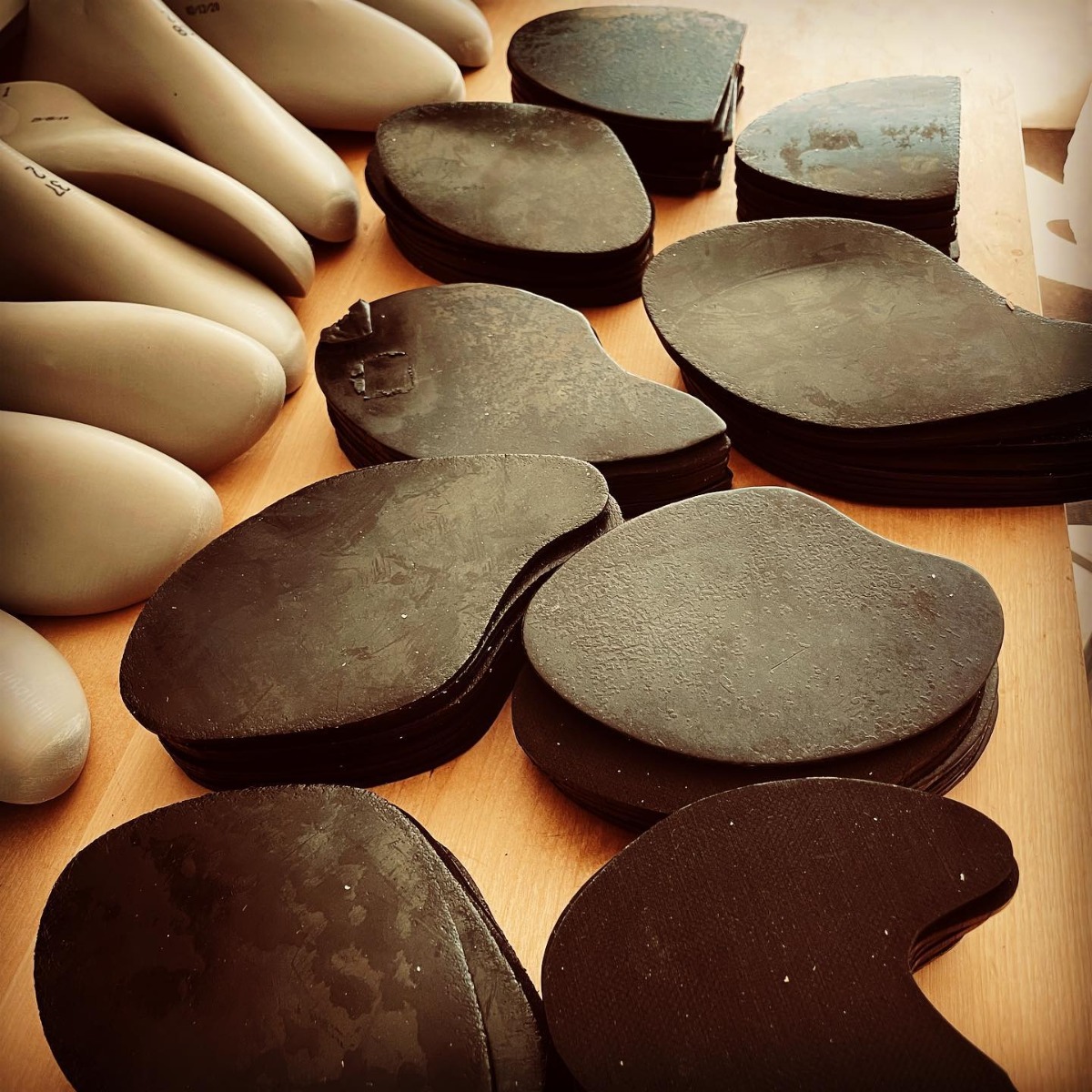 What is involved in that? What are the sorts of things you need to manipulate to regain those performance properties?

N: Definitely the rubber can be manipulated. We individually shape the rubber to each shoe. Then there is the glue, the temperature, the timing – there are so many factors.

G: And I have some things to add.

G: One thing that you need is the correct shaped last. Do you know what a last is? We have a variety of lasts. So, step one is getting the right size and shape for the particular kind of shoe.

G: As well, we do size up and size down, depending on what people want. The choice in last does help in sizing up and sizing down. Next is the rubber tension that's applied. That helps shape the shoe as well. Because, you can just flop a piece of rubber on a piece of suede and it doesn't resemble a climbing shoe. But with the last, and the correctly shaped rubber patch—

N: —that you place on the shoe with the correct tension.

G: Yes. It actually has to be applied with the correct amount of tension, so that it pulls in the right way. The tension in the rubber gives the right shape and structure to the shoe. 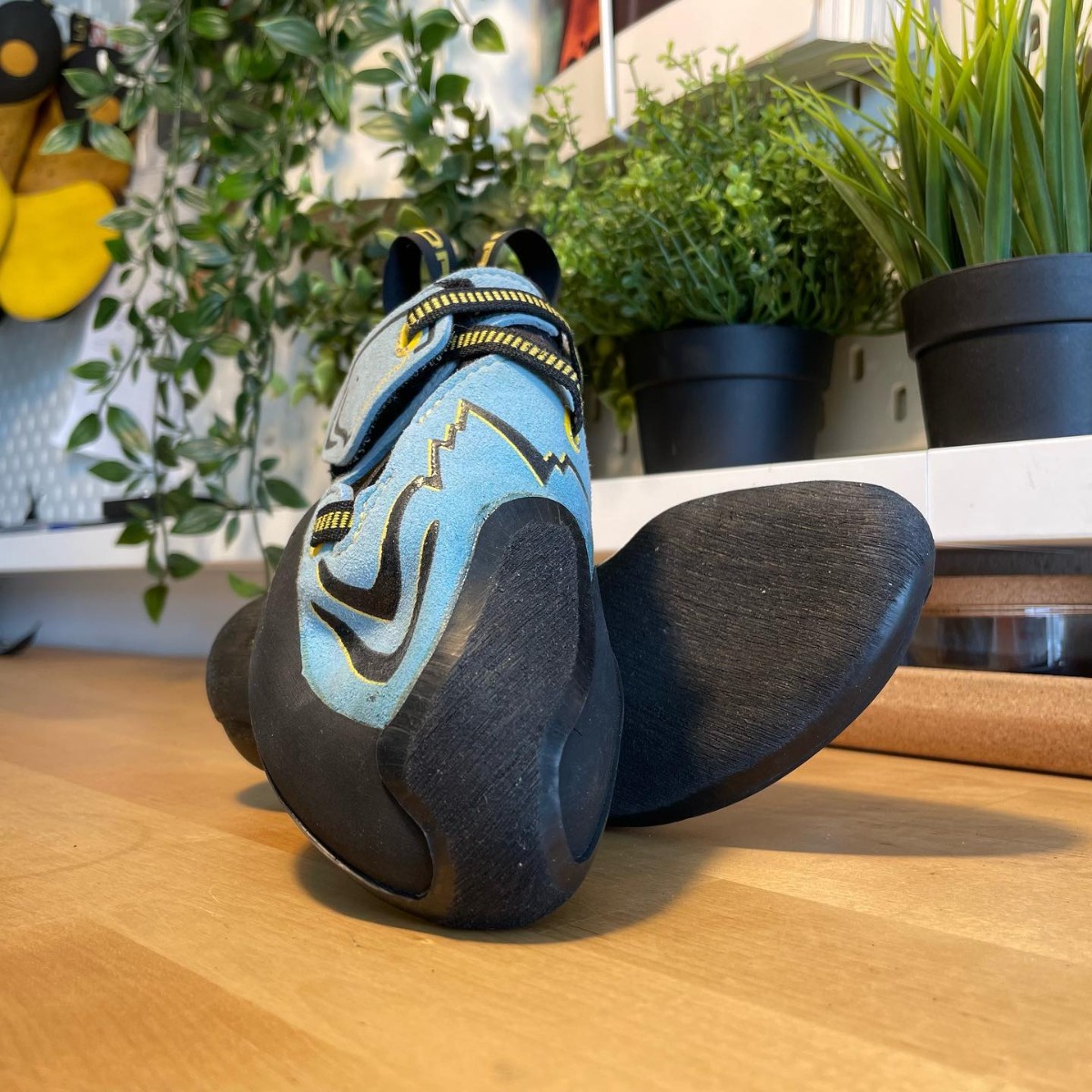 Which is the most difficult shoe to resole and why?

G: Probably the No Edge shoes by La Sportiva. The Genius, Futura and Theory.

N: I concur. The No Edge sole patch has three different thicknesses amongst just that one patch. Recreating that is difficult. And it has to be pulled in three different directions at once.


I think a lot of resolers don't do the No Edge shoes.

N: We understand why. Firstly, there’s this crazy rubber patch. Number two: you need the correct equipment to manipulate the rubber.


What else do your big machines do?

N: Pressing is one.

G: It's like a large press. It's like blowing up a rubber balloon, but obviously to a higher pressure. And so after you've glued on the sole or the rand, it actually envelops the shoe, so that there's pressure applied evenly to every point.

G: Another machine is a finisher, which helps us to prepare patches. You need to roughen up patches before they go on to the shoe.

N: That’s a multi-tool, because it also prepares the shoe.

G: Yes, it has a rotating brush, which gets rid of all the glue from the old sole.

N: There are multiple attachments on this finishing machine for grinding, smoothing, finishing…

G: We've got a cutting machine, which, take a look around the rand of your climbing shoe – notice how it thins out to almost zero? 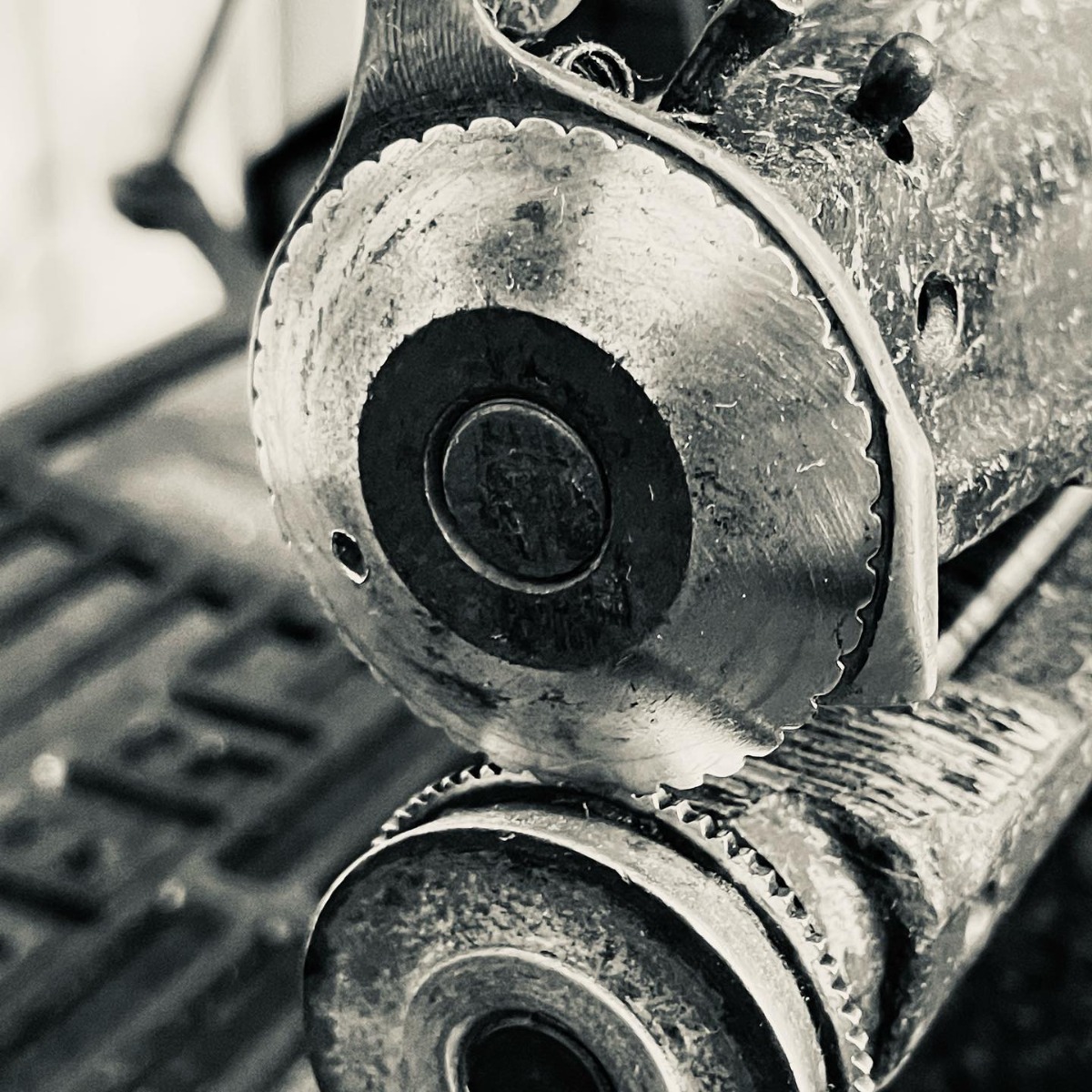 How difficult was it to set up a workshop in Australia?

G: There's a reason why there are only four or five resolers in Australia right now. I've got an economics background, and one of the terms we use is 'barriers to entry'. And I think there's a huge barrier to entry because people don't know what you need and how to use it. From our multiple mentors, we could see what worked and what didn't. We actually purchased all of our equipment while we were overseas and we imported it all back here.

N: The same as our mentor was using.

N: That's what we wanted to import into Australia. That different style of resoling, with these specific machines.

G: And we knew it would work because it's been working for the best in the world.

N: And it was a long process and a long slow boat. It was not easy to set up a workshop here.

N: It's quite challenging, and, there were little misunderstandings there. It's a miracle it got here in the end. And then dealing with customs and importing…


Where did you set it up?

N: We literally started up in the tiniest space, almost in our kitchen – in a house in Eastern Sydney. Somehow it grew from our kitchen, to our lounge room, to our garage…

G: And now we have big new work space in Gwynneville [Wollongong].


How long have you guys been established here? 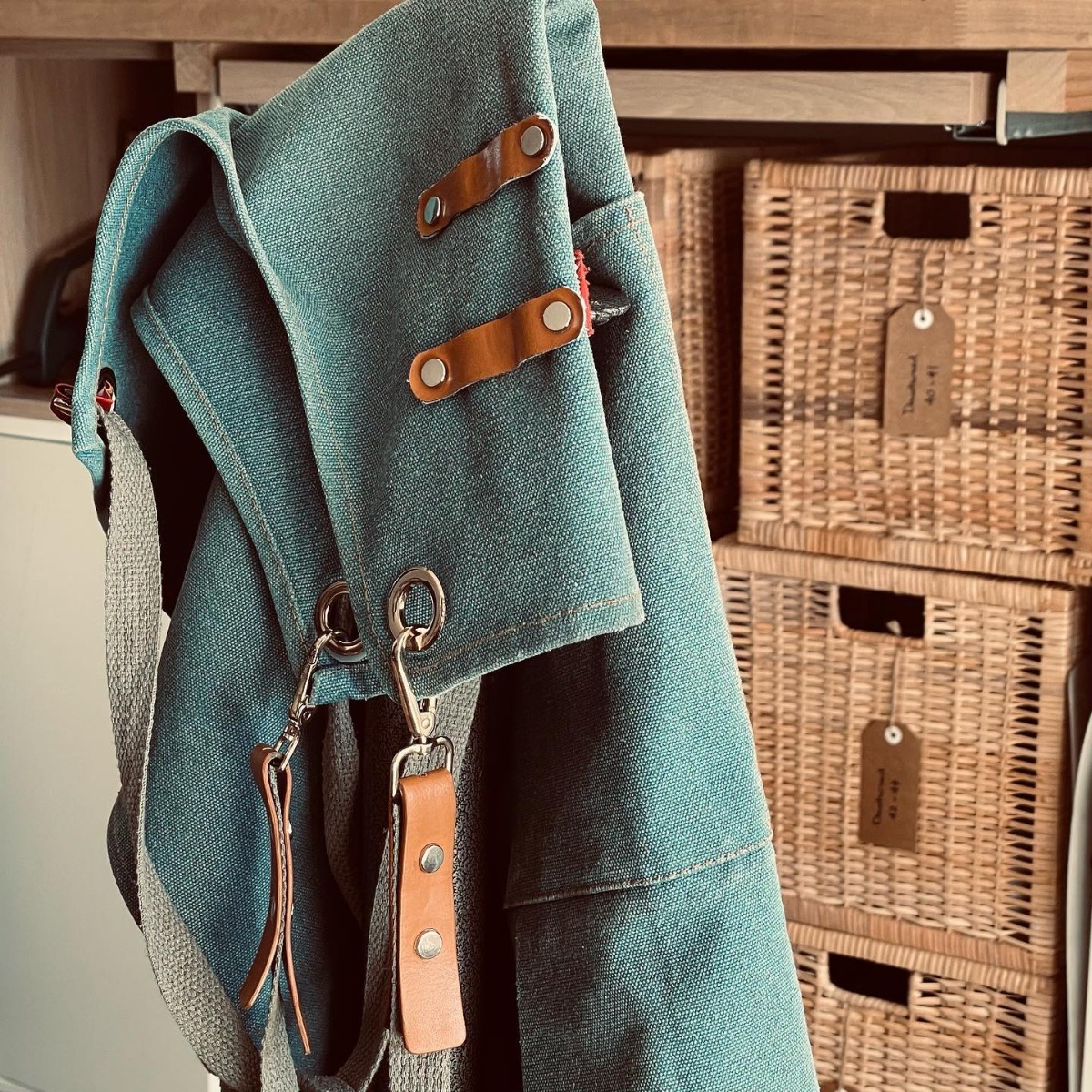 There is a bit of a reputation that some resolers take a long time to turn things around.

N: We won't churn them through like Mr Minit. We do what’s needed to return the shoes to performance level.

G: No, we don’t want to be like Mr Minit, doing a hundred resoles a day. We just want to maintain a consistent quality.

N: And we want to enjoy it.

See our range of climbing shoes.

Some thoughts on goal setting, when the goal posts keep shifting 15/09/2021